Ortelius's Theatrum Orbis Terrarum (Theatre of the World) is considered the first true atlas in the modern sense: a collection of uniform map sheets and sustaining text bound to form a book for which copper printing plates were specifically engraved. The Ortelius atlas is sometimes referred to as the summary of sixteenth-century cartography.

Ortelius's Theatrum Orbis Terrarum (Theatre of the World) is considered the first true atlas in the modern sense: a collection of uniform map sheets and sustaining text bound to form a book for which copper printing plates were specifically engraved. The Ortelius atlas is sometimes referred to as the summary of sixteenth-century cartography. Many of his atlas's maps were based upon sources that no longer exist or are extremely rare. Ortelius appended a unique source list (the "Catalogus Auctorum") identifying the names of contemporary cartographers, some of whom would otherwise have remained obscure. More than an original concept, the Theatrum was also the most authoritative and successful such work during the late sixteenth and early seventeenth centuries. Because it was frequently revised to reflect new geographical and historical insights, contemporary scholars in western Europe praised the Theatrum highly for its accuracy, even as they embraced the atlas's concept. The Theatrum atlas first appeared in 1570 and continued to be published until 1612. During this period, over seventy-three hundred copies were printed in thirty-one editions and seven different languages-a remarkable figure for the time.

The original 1570 Latin edition of the Theatrum mapbook consisted of seventy maps on fifty-three sheets with accompanying texts. In the Geography and Map Division of the Library of Congress, there are copies of each of the four imprints from that edition. The online collection presents images of the entire third imprint. This particular volume was unbound for conservation treatment, thus making individual maps and narratives in the atlas available for scanning.

Abraham Ortelius, maker of the Theatrum Orbis Terrarum, is 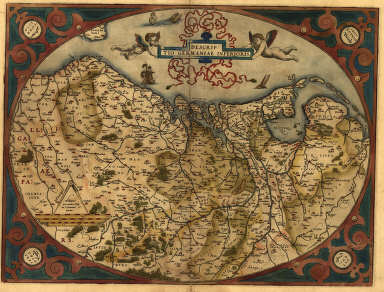 regarded as one of the most prominent geographers of the sixteenth century. Before the publication of the Theatrum, Ortelius was a respected student of classical history and a collector of books and old coins but had found only modest acclaim for his cartographic skills. Yet, he had made a living as a professional illuminator after 1554, illustrating hundreds of maps, and making at least six single- and multi-sheet maps of his own between 1564 and 1570. Still, it was the Theatrum that firmly established his reputation as a cartographer and made him a wealthy man.

When the Theatrum appeared, European map production was shifting from Italy to Antwerp, Ortelius's home town and a center of entrepreneurial activity in Europe. "Mapbooks" had appeared in several formats well before Ortelius first started preparing the Theatrum project. Portuguese discoveries of the fourteenth and fifteenth centuries were documented by manuscript charts bound together in volume format. Some wall-maps were also bound. In the 1560s, many so-called "I.A.T.O." (Italian atlas assembled to order) or "Lafreri" volumes had been printed, flooding the market but not necessarily unifying maps and text into a single context or printing format. Rather than appearing as a single edition, Italian atlases were assembled to suit the needs of the individual customer. Ortelius departed from the Italian model by placing far more emphasis on the explanatory quality of the text while giving nearly equal weight to all elements of the atlas. Cut to uniform size and printed as a single-sized compilation of maps, historical narratives, and source references, the Theatrum was from the outset an encyclopedic description of the world like none before it.

Encyclopedic also was Ortelius's method of paying homage to existing sources. The Theatrum's maps were a careful selection of the best available cartography. They were logically organized to represent continents, groups of regions, and nation-states, with the text (one or both halfsheets on the backs of the maps) providing relevant information and further references.


The first edition's bibliography or "Catalogus Auctorum"-a separate section in the atlas-lists not only all thirty-three cartographers whose maps Ortelius consulted, but all eighty-seven geographers known to him. The "Catalogus" was thus the first critical attempt to provide readers with a historical context for published maps. In an era when naming references was the exception rather than the rule, Ortelius was one of the best bibliographers of early cartography.

Earlier mapbooks (after ca. 1400) had been based on the work of Claudius Ptolemy, whose Geographia recorded classical Greek geographic knowledge in the second century A.D. and was the chief source for cartographic publications in the early Renaissance era. Ortelius's Theatrum definitively freed cartography from the influence of Ptolemy although convention still demanded that the new form of map presentation and illustration pay homage to the classical writers.

While not a scientific innovator, Ortelius is best remembered for his ability to gather an immense body of existing geographic knowledge and to publish it in a consistent and high-quality cartographic format: the atlas. As a synthesis of many existing maps, the Theatrum's world map, for example, was influenced by the cartography of Jacobo Gastaldi (world map, 1561), Diego Gutierrez (portolan map of the Atlantic, 1562), and, not least, by Gerardus Mercator's 1569 world map. The map of Europa found its inspiration in the work of Mercator (wall map, 1554), Olaus Magnus (Scandinavia map, 1539), and Gastaldi (first map of Asia, 1559, and Africa map of 1664). The Asia map was based upon Ortelius's own wall map of 1567, which was in turn made after Gastaldi's 1559 Asia map. Compiling, refining, and reducing maps and multiple maps of other geographers to folio pages measuring approximately 57.6 by 42.6 cm was the essence of Ortelius's atlas-making labours.

The single most crucial source for much of Ortelius's mapping was the influential 1569 world map of Gerardus Mercator (1512-1594). At least eight plates in the Theatrum were directly derived from this map. Mercator, Ortelius's contemporary, who coined the word "atlas" for a book of maps, could boast maps and atlases of superior accuracy and comparable influence. The original idea of fitting maps to size and binding them in a smaller format may also have been his. Throughout successive editions of the Theatrum, Ortelius often modified and even replaced maps based on advice, findings, and encouragements from Mercator. It has been suggested that Mercator deliberately delayed the publication of his own atlas in order to accommodate Ortelius, but no clear evidence substantiates the claim. Much more an original empirical scientist than Ortelius was, Mercator drew many of his own maps and redrew them for use in his 1585 Atlas. By reducing the texts and further increasing the integration of maps, Mercator gradually refined Ortelius's atlas concept. In theTheatrum, Ortelius did not forget to pay special homage to Mercator, whom he had befriended as a young man in the early 1550s.

In evaluating the importance of the Theatrum Orbis Terrarum, one must also consider its circumstances of publication and the sheer length of its publication history. Ortelius was neither wealthy nor without competition in his field of scholarly activity. Even as he was preparing the first edition of his atlas, contemporaries in Antwerp, such as Hieronymus Cock (c. 1507-1570), Gerard de Jode (c. 1508-1591), and Gerardus Mercator, were formidable rivals. In the late 1560s De Jode began compiling his competing world atlas, Speculum Orbis Terrarum (whose publication was considerably delayed and did not occur until 1578). The two men had collaborated on an earlier world map (1564) but had then become estranged. Meanwhile the Cologne humanist Georg Braun (1541-1622)-an acquaintance of Ortelius-was planning the publication of his city atlas Civitates Orbis Terrarum, which was first published in Cologne in 1572.

In this competitive atmosphere, the Theatrum, while representing Ortelius's deep understanding of geography, came into being as a commercial venture and partnership. While undertaking to pay for its early printing himself, Ortelius involved numerous business and scholarly connections-engravers, printers, and merchants-he had met as an illuminator. Crucial to the eventual success of Theatrum was his connection with the Antwerp printing house of Christoph Plantin (or Christoffel Plantijn, c. 1520-1589), which assumed responsibility for printing the atlas in 1579. Commercial success nevertheless appears to have come as a surprise. An emerging, well-to-do middle class in the Netherlands was taking an active interest in education and scientific matters and the Theatrum's format, like that of earlier atlases, was far less cumbersome to use than sets of loose sheets. The atlas's popularity, and the many reactions and encouragements he received to continue printing his "manual," may in part explain why Ortelius immediately began revising errata, verifying and adding source references, and changing less conspicuous textual elements.

All editions of the Theatrum have a common structure. The single-volume atlas opens with an allegorical title page depicting the five continents then known as native goddesses. There follows a dedication to Philip II, King of Spain and the Netherlands; a poem by Adolphus Mekerchus (Adolf van Meetkercke), on the title page; a portrait of Ortelius by Philip Galle (in editions of 1579 and later); an introduction by Ortelius himself; a letter of recommendation by Mercator; the list of sources ("Catalogus Auctorum"); an index of regions and place-names ("Index Tabularum"); the atlas proper, consisting of maps with accompanying text on the verso; a register of place-names in antiquity ("Nomenclator"); a treatise ("De Mona Druidum", by Humfred Lhuyd); and finally the privilege and a colophon.

After Theatrum Orbis Terrarum's initial release, Ortelius regularly revised and expanded the atlas, reissuing it in various formats until his death in 1598. From its original seventy maps and eighty-seven bibliographic references in the first edition (1570), the atlas grew through its thirty-one editions to encompass 183 references and 167 maps in 1612. Only after 1610 did the atlas's accuracy begin to be called into question by more recent findings, such as those found in the works of the Blaeu family and Jodocus Hondius. Throughout its publication history, however, the Theatrum Orbis Terrarum was the undisputed leader in the field of European atlas-making.

To use this software, you must install the free ExpressView MrSid software which is included on the CD. This is a 30 second process and will allow you to view and manipulate/print all the maps in this CD collection in full detail. There is a version for Windows platforms and full installation instructions are included on the CD.