Thomas Edison and the Origins of Motion Pictures on Six DVDs 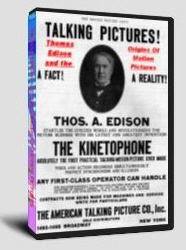 Thomas Edison and the Origins of Motion Pictures is a 6 DVD collection of 341 of the earliest films ever made.

Edison's laboratory was responsible for the invention of the Kinetograph (a motion picture camera) and the Kinetoscope (a peep-hole motion picture viewer). Most of this work was performed by Edison's assistant, William Kennedy Laurie Dickson, beginning in 1888. Motion pictures became a successful entertainment industry in less than a decade, with single-viewer Kinetoscopes giving way to films projected for mass audiences.

The Edison Manufacturing Co. (later known as Thomas A. Edison, Inc.) not only built the apparatus for filming and projecting motion pictures, but also produced films for public consumption. Most early examples were actualities showing famous people, news events, disasters, people at work, new modes of travel and technology, scenic views, expositions, and other leisure activities. As actualities declined in popularity, the company's production emphasis shifted to comedies and dramas.

All films are silent and the total run time of this collection is 9 hours, 58 minutes.

The collection is organized by year which allows you to view the improvements in film technology as it occurred. The films also offer a fascinating glimpse of what was important and attention getting in that era as many of the films were developed to be shown to the masses. This collection serves as a great collection films with the technology spawned by the inventor of the motion picture.